Home Again in the OWB 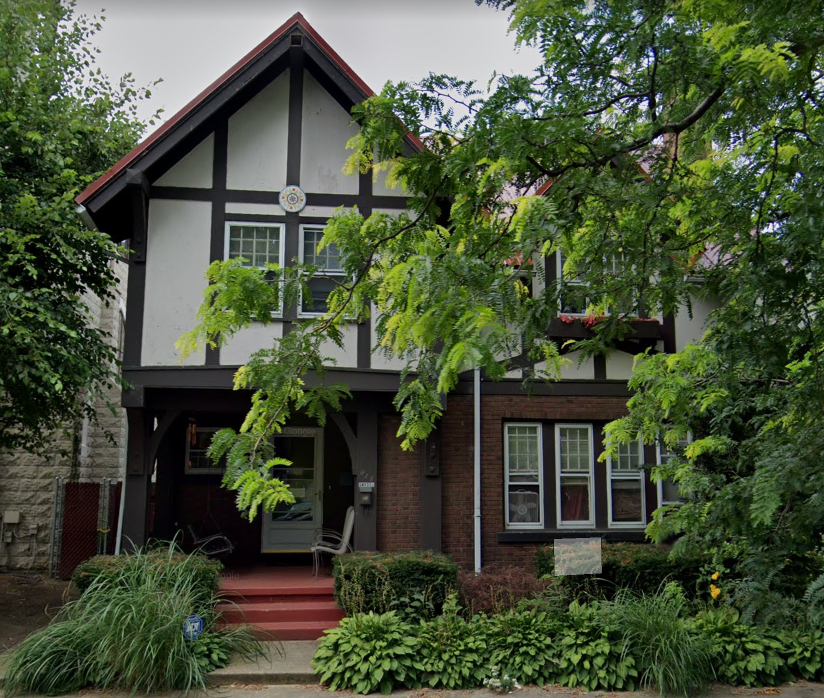 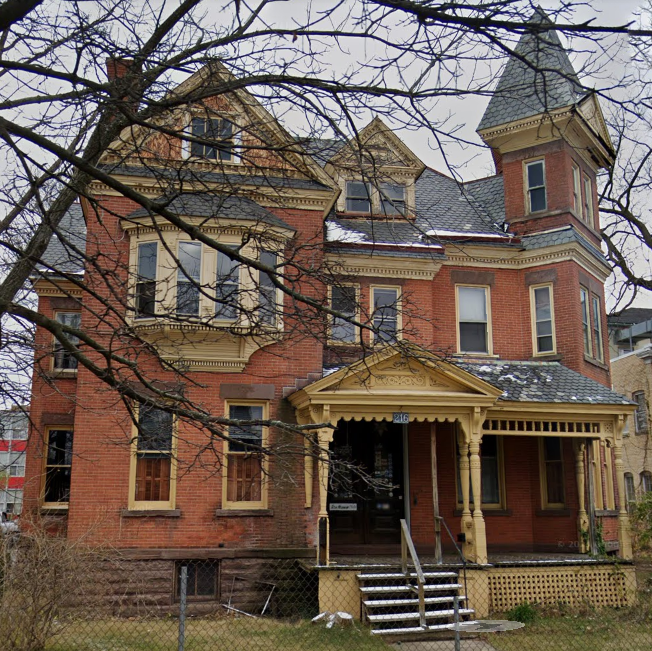 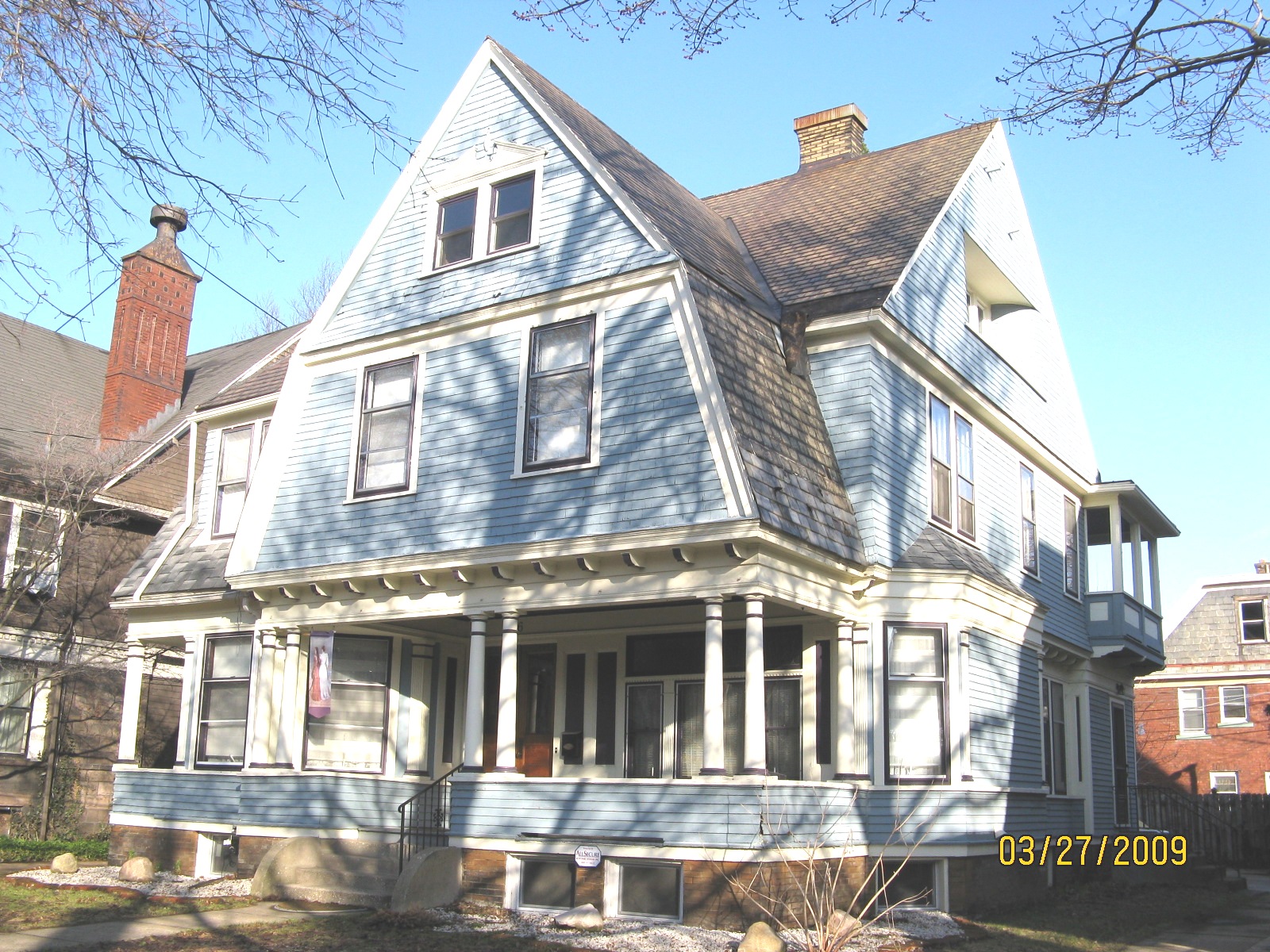 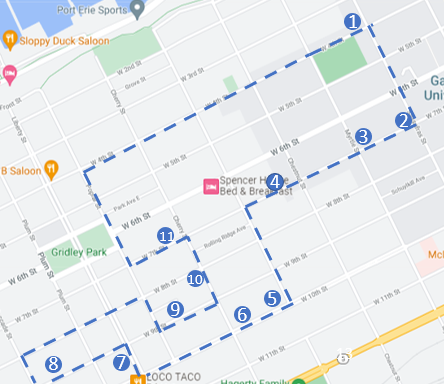 Click here to get the full version of the map in PDF form.

Many thanks to Preservation Erie for creating this week’s walk. This last walk of the West BayWalk series highlights some of the diverse types of residential architecture found throughout the West Bayfront neighborhoods. You can clink on the addresses to find the homes on Google Maps, also click on the architectural characteristics to see what they look like.

Home Again in the OWB:

Defining Architectural Characteristics: The main feature of a Second Empire home is the Mansard Roof (a four-sided gambrel roof with a shallow or flat top usually pierced by dormer windows), but also the pavilion around the door and upper window (which is a segment of the façade that is different in height or ornamentation than the rest of the building), and the massing (how large the building appears).

Historical Background: This home was built by Clark Olds, a successful attorney who was also once the owner of the Park Opera House on North Park Row.  It became the long-time home of photographer Ron Norman, who owned the home until September of 2020 when it was purchased by Tom Hagen/Historic Preservation Trust for rehabilitation.

Historical Background: This is Gannon’s Kirk house.  Kirk is the Scottish word for Church, making this home the “Church House,” providing living quarters for religiously committed Gannon students. The home was originally occupied by G.B. Wingerter, a successful tobacconist and cigar maker in Erie.

Defining Architectural Characteristics: Pyramidal roof, boxy design, center dormer (often on all four sides), large front porch. This home also features “clinker bricks.” Clinkers were the result of bricks being kept too close to the heat source in the kiln. Their appearance is darker and less uniform in color, and the brick shape is often irregular. The term “clinker” refers to the sound these make when banging together.

Historical Background: This was once the home of William Illig, whose father, Daniel Illing, a tailor and men’s clothing store owner, built the grand Second Empire home at 21st and Peach (that is now Bastion Studios).  William Illig was a lawyer and one of the founding partners of MacDonald, Illig, Jones and Britton Law Firm.

Defining Architectural Characteristics: Symmetrical shape, prominent columns, porch entry, decorative cornices and friezes. Note the gable turned to face the street, which is an aspect reminiscent of a Greek Temple.

Historical Background: This was once the home of Martin and Lydia Schabacker.  Martin was a wholesale fruit and vegetable dealer, who ran his store “People’s Grocery” at 15th and State.

Historical Background: The original occupant of 912 Liberty St was M.G. Mayo, who owned a luggage shop at 709 State Street and was a popular basketball player at the YMCA.

American Foursquare Aspects: square, two and a half story construction, with centered dormers on all four sides.

Historical Background: This home was included on the walk to give an example of a well-known architect’s work in Erie.  C. Paxton Cody designed a number of homes and buildings in Erie around the turn of the 20th Century.  Some of his most well known designs are the number of Craftsman Style homes he built on Lincoln Avenue.  He also designed homes and buildings in Pittsburgh and Cleveland and was the president of the PA State Association of Architects.  In this neighborhood, he also designed the church (turned apartments) just south of 9th Street on Liberty (directly next door to the Tudor Revival example)

Historical Background: This was once the home of Col. Percy Lancelot Jones, who was a U.S. Army Physician as well as the superintendent of Hamot Hospital in the 1930s. He was instrumental in the invention of the ambulance.

Historical Background: This home is known as the Thayer-Thompson House and is listed on the National Register of Historic Places.  The home’s namesakes: Oscar Thayer and Victory Thompson were both in the oil refinery business and built their wealth through the black gold of Titusville.  Thompson ran the Erie City Oil Works, which was eventually purchased by Thayer, which he then sold to the Standard Oil Company.  Curiously, they both lived in this home at different points in their lives.

Defining Architectural Characteristics: The most defining characteristic of a Dutch Colonial is it’s gambrel roof, having curved edges and spanning the length of the house. Two chimneys on either end, wood frame with cedar shake siding (note the “clinker bricks” comprising the eastern chimney. More on this in the American Foursquare example).

Historical Background: This home resides at the Southeast entrance to Garden Court, Erie’s first planned subdivision which has 27 homes all built around a shared interior courtyard. In 1906, the property of this city block was purchased and planned out by James Baldwin, and the homes on the block were built between 1908-1930. This home, the Osborne House, was among the first built in this subdivision.

Thank you for participating in this year’s West BayWalk series. Enjoy the rest of summer in the beautiful West Bayfront!