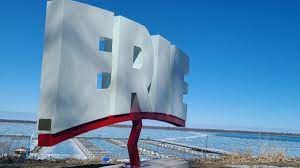 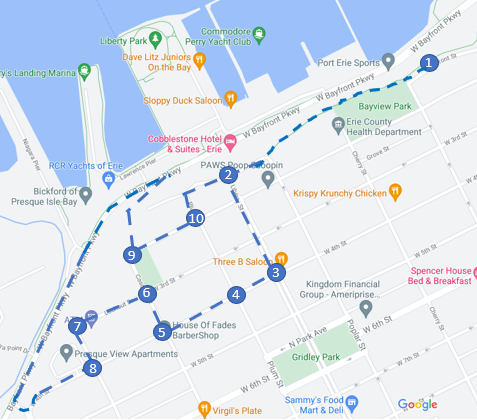 Many thanks to Dr. David Frew, a Jefferson Educational Society Scholar in Residence, who researched and mapped out this week’s West BayWalk.

The Our West Bayfront kicks off its West BayWalks by learning about Bay-Rat kids and Erie neighborhoods during the 1950s. Bay-Rats were kids who prowled Northwest Erie. Their “territory” included the Bluffs overlooking today’s Bayfront Parkway, the Cascade Docks, and the adjacent neighborhoods. Their era was the 1950s, a simpler time, when parents allowed children to wander unsupervised. Put on your walking shoes and “return to those magical years.”

1.The Bluffs on Front Street: The three modern commercial docks below were built in the late 1800s and shifted Erie’s maritime economy west from downtown. As amazing as it may seem these days, people regularly drove to the bluffs and tossed trash over the edge.

4. The 900 Block of West 4th Street:  This block was the neighborhood epicenter.  Notable addresses include:

5. West 4th and Cascade Street: The corner of West 4th and Cascade Street was the last stop for one of Erie’s busiest trolley routes. After the streetcar stopped here, the conductor moved to the other end of the car and headed back to State Street. The 4th Street line ran continuously back and forth to State Street. After the Cascade Docks opened, Cascade Street became one of Erie’s most important thoroughfares, and the corner at 4th Street became a busy commercial intersection.

Adjoining Semple Houses:  After establishing a bootlegging business during Prohibition, two Semple boys commissioned adjoining homes in the brand new, mid 1920s (nine-home) development on the south side of Lookout Drive (3rd Street). Their basements were connected by an underground tunnel, which contained a bank vault and storage room.

United Oil: Erie’s earl fuel oil delivery company had a depot and storage yard with huge tanks in the area that now contains “The Bluffs Condos.”

Playground: Bay-Rat Stadium, the neighborhood softball field, was located on the north side of 3rd Street with home plate at the southeast corner. Several legendary local athletes played here.

Semple Family Homestead: The original Semple family home was just two houses east on West 3rd, on the south side of the street.

Second Field: Before it became the Laura Wallenstein Home this was a wooded, vacant field and adventure emporium for neighborhood kids.  From the northern end a kid could see the entire bay and peer over Presque Isle to Lake Erie.

Cascade Promenade: The original Cascade Street continued down the hill to the docks from 2nd Street.  Dock access was moved to Cranberry Street in the late 1950s.  In recent years the old graded right-of-way was reengineered to a walking path.  The eastward bend at the bottom of the bluffs was a railroad spur leading to a water tank for early railroad steam engines.

Note the War of 1812 tribute marker on the south side of the street.

8. Strong Electric Station: From this corner, the Strong coal-fired electric generating plant, with its distinctive smokestacks, would have dominated the western horizon. The facility was located between West 4th and 5Th on Cranberry Street, and it was demolished in 1967.

Enjoy views of the lake, as you continue the walk along the Bayfront Connector.

Check out these related articles that have more history on this area.

4. The Cascade Docks: An Unimaginable Transition

7. Field of American Dreams: From Italy to Baseball

14. Read the series “On the Waterfront”

To get weekly updates and the self guided walks emailed to you, register through this link: https://forms.gle/cVTJ3zArb4RbNnCv8